We hope you love the products we recommend. Just so you know, OnTrack Fishing may earn an affiliate commission from the links on this page, at no extra cost to you.

When you are ice fishing, it’s pretty easy to have a crappie day – pun intended.

Crappie are some of the most delicious types of panfish you can land, and since they’re found just about everywhere, they are one of the best and easiest species to fish for.

However, you’re not going to be very successful if you don’t have the right tools in your arsenal.

Arm yourself with the right equipment, however, and you’ll be on the way to a killer day on the ice.

Not sure what to look for?

In this guide, we will walk you through the best ice fishing crappie lures you can buy – and we will give you some helpful tips for landing tons of crappie each time you head out on the hard water. 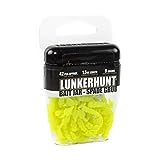 Lunkerhunt HSG01 Spade Grub Bait Jar Chartreuse
Infused with scent; Bait jar lures will not dry out in the Sun; Maintain their performance both in and out of the water 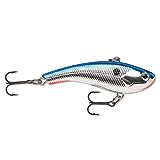 What to Look for in Ice Fishing Crappie Lures

In general, when you are fishing for crappie, you are going to want a lure that is relatively small.

It can be tempting to size up, thinking that you’ll have a greater likelihood of reeling in monster crappie, but unfortunately, this often is not the case.

The metabolism of a crappie slows considerably during the winter months, making it move more slowly through the water. A smaller lure will be less likely to scare a school of crappie away.

That being said, some of the lures I’ve recommended are on the larger end of this recommended range – so if you want to go after the big guys, you’ll be fully armed with the equipment you need to do so.

Crappies don’t have the best of the best eyesight, but it’s not too shabby, either. There are four main strategies you will want to consider when you are selecting jig and lure colors.

You can choose a bright colored jig, like an orange, white, or pink lure, or you can choose one that is more subdued.

Often, a more subdued jig will have natural colors like brown, dark green, or black.

Another option – and without a doubt one of the most popular – is chartreuse. Consider investing in a handful of these colors and patterns.

You never know what colors the crappie will be biting on during any given day, so it helps to have a variety of tools that you can try out if you get the chance.

Crappie respond well to flash and movement. Choosing a heavier lure or a crankbait may help you attract the attention of these fancy fish!

Remember, it’s going to be dark beneath all the ice and snow. Your goal should be to attract a crappie with the movement of your lure alone – the color might not always be visible.

Some lures have vibrating mechanisms that don’t require you to do little more than your normal jigging movements.

Others have rattle systems – this means that your lure will make some noise as it moves through the water.

This can attract not only the crappie that are already swimming nearby but those that are in schools a bit further away.

The Lunkerhunt Spade Grub looks like something out of a sci-fi movie, but trust me, it’s effective. As a downsized plastic lure, it has become a staple bait for crappies.

To use it, all you need to do is thread it onto a lead or tungsten jighead.

This 1.5-inch scented lure has a molded flat, spear-shaped tail. This tail flutters and kicks with just the lightest of tip or bobber movements.

It’s an incredibly simple bait that’s easy to use – but the crappies won’t be able to resist.

Lunkerhunt Spade Grubs are sold in bait jars that are scent-infused, so you can easily regenerate the scent of your boat by dipping them back into the containers whenever you are ready to do so.

These lures have special engineering with a unique technology that makes them more durable than other soft plastics or hard baits.

They come in three colors that are effective and simple – white, pumpkin, and chartreuse. Need I say more?

Tungsten is a great choice in a lure because it is more dense than lead. It drops down quickly yet will still react well with the movement of your fishing rod.

Since it has more weight, your bait will be more animated – and more likely to attract crappie.

Just keep in mind when using this jig that crappie feed lightly, so you’ll want to keep a close eye on the movement of your rod tip.

Tungsten is heavy, which can make it more difficult to differentiate between the jig movement and an actual bite.

A petite little softbait, the VMC Tungsten Wax Tail Jig comes in eight different colors, most of which also glow in the dark.

You’ll get fifteen minutes of illumination each time you charge them by using a bright light. That kind of ability gives you a serious advantage out there on the water!

This jig dives quickly to your desired depth, moving quickly and lightly through the water. It’s one of the best lures you can use while fishing for crappie through the ice.

Although the name is somewhat of a tongue twister, the Rapala Ultra Light Rippin’ Rap is one of the best lures for targeting larger crappie throughout the ice.

A lipless crankbait, this lure can be used on crappie in both the summer and winter months.

Crappies are known for having large mouths, and they’re greedy with their mouths, too. They like munching on large bites of food, and the bigger the fish, the bigger the bite is going to be.

The Ultra Light Rippin’ Rap targets these trophy crappies, but despite its size, it moves lightly in the water. It has a vibrating action along with textures, gills, and scales.

It even has 3D holographic eyes that add to its lifelike appearance. There are several UV patterns available, too.

It has a unique rattle that draws fish in even if they aren’t positioned directly near you.

You can bring the fish to you instead of following them all around the lake – that’s right, no more drilling thousands of unused ice fishing holes!

The Rapala Ultra Light Rippin’ Rap has a large profile and is ideal for behemoth crappies.

Swedish Pimples are some of the most popular ice fishing crappie lures. As a classic tool, the Swedish Pimple is flashy and attractive, drawing in crappie when other baits and jigs just aren’t working.

Many anglers even use Swedish Pimples as lures to attract other nearby fish. All you need to do is have a separate line in a hole drilled about a foot away from the first.

Rig up your jig, and you’ll find that curious crappie come in for a closer look – and the Swedish Pimple seals the deal.

You might consider using the Swedish Pimple with a wax worm for added impact!

If you’ve ever been sitting atop a pile of crappie, reeling in fish after fish, but finding yourself disappointed because you only catch the tiniest fish, then the Rapala Slab Rap is for you.

This lure is an excellent way to weed out the little guys because they won’t be able to latch on to this more aggressive bait.

It looks and functions much like a crankbait, but the lure weight is positioned in the front part of the bait instead.

It has a weight-forward design that gives it exceptional flutter during the retrieve and the fall. The flutter looks just like the movement of a baitfish and is sure to drive the crappie crazy!

This lure is great because it can be used not only during the winter months but also when you are fishing on the open water during the summer, too.

When it comes to fishing for crappie through the ice – as well as fishing on the open water – it’s important to understand exactly where these fish are likely to position themselves.

Normally, crappie are found in shallow lakes with plenty of vegetation.

Crappies feed on small aquatic organisms that live within this vegetation, so, almost always, they will be located two to three feet off the bottom of the lake.

However, this can be influenced by the time of year. At the very beginning of the winter, the water has a high content of dissolved oxygen.

The fish can easily hang out on the bottom of the water column, where it’s warmer.

As the winter months pass by, though, the fish use up the oxygen and there isn’t as much toward the bottom of the lake. This is especially true if there is a lot of snow on top of the ice.

Therefore, you’re more likely to find crappie closer to the top of the water column toward the end of winter.

Finding crappie can be a bit of a “crap” shoot but having a few general ideas of where to look can be immensely helpful. Don’t be afraid to drill a few holes!

Have the Right Equipment

Having the best ice fishing crappie lures is a great place to start, but those aren’t the only tools you need in your tackle box.

Many crappie anglers like to use fish finders when they’re fishing for crappie through the ice since you’ll be able to find exactly where these fish are hanging out.

You will also want to invest in an ultra-sensitive ice fishing rod that is soft and flexible, too.

Know How to Feel the Bite

Although having the right crappie lures will make it easier for you to both get and feel bites, you also need to know exactly what a crappie bite feels like – it’s not quite like anything else you’ve ever experienced.

Crappie, like most fish, tend to feed first thing in the morning and then later in the evening. These are the best times of day to fish.

When it comes to sensing a bite, you will need to pay close attention to your rod. Crappie swim to their prey and suck it in from below, slurping in an upwards-facing fashion.

As a result, your pole will be bent just slightly from the weight of your lure and will straighten up when the fish eats it. Bites can be subtle, so you really can’t be too cautious.

And of course, no day out on the ice would be complete without good ice fishing lures for crappie.

While you can skate by with the lures you use for other species of fish, you will be much more successful if you invest in an array of lures that can be used specifically on crappie.

These lures are designed for a crappie’s unique mouth and biting style, and with a little bit of practice, you’ll be using them to reel in monsters in no time.

Where to Find And Locate Walleye Ice Fishing

Ice Fishing for Rainbow Trout, Tips and Tricks For How To Catch More